The Alpha Gamma chapter was installed at Washington State University in Pullman, Washington on February 10, 1921. The first class of new members of the Alpha Gamma Chapter consisted of just 16 women. 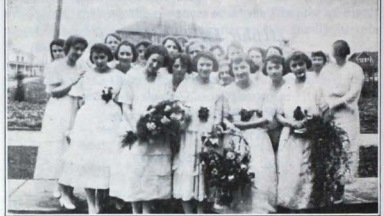 Members of the Mu and Lambda chapters made the trip to Pullman, Washington for the initiation of these women. Connie Buzby managed the forming of this new chapter of Sigma Kappa, and the Sigma Kappa Triangle of June, 1921 promises us that this was a fun-filled weekend for all of the women involved.

The Alpha Gamma Chapter has grown significantly over the years. Our chapter's total has reached a total of 180 amazing women. In our little college town of Pullman, Sigma Kappa gives its members a true "home away from home", and allows our members to grow and succeed during their time at Washington State University.

In 2021, Alpha Gamma will celebrate it's 100th year since it's installment at Washington State University. All alumnae are invited to come celebrate with us. More information on the centennial celebration can be found here in the near future! 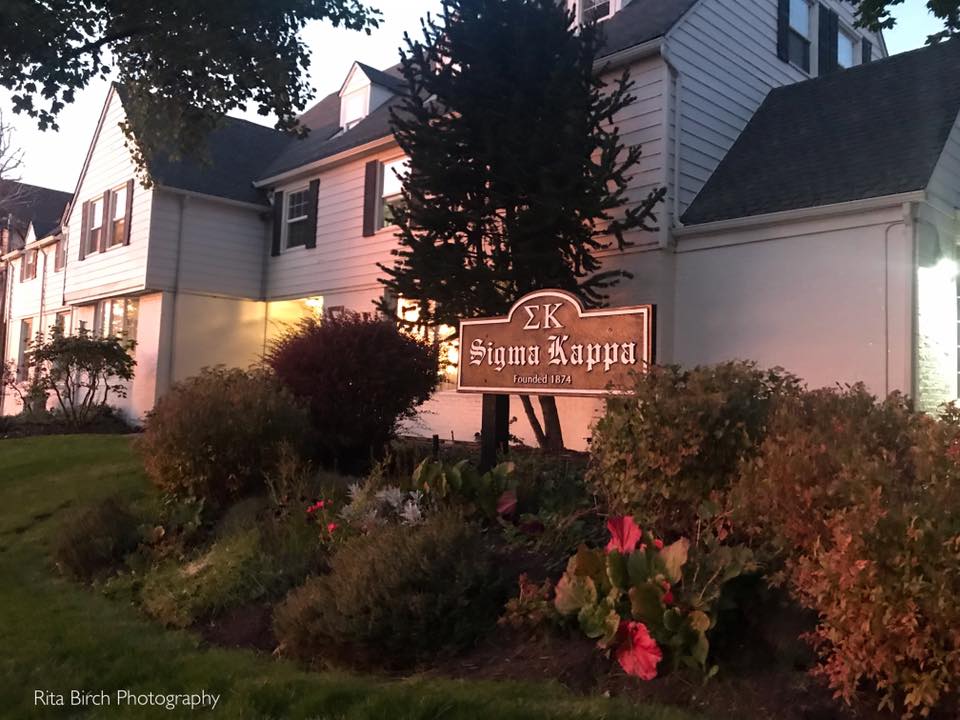 Being a Sigma Kappa is an amazing part of our collegiate experience at Washington State University. A phrase that is often said with passion throughout the Greek community here is "It's not four years, it's for life", referencing the fact that while we are an active member of our Greek organizations for the four years we are at the University, once we graduate, we are still lifetime members, and sisters for life. Hearing this daily is a reminder that when we became members of Sigma Kappa, we were committing to a lifetime in an amazing sisterhood with women we would share values with for life. Though this saying is something we hear often, it never completely rang true to me, until I met one of Sigma Kappa's alumna from the 1952 member class, Nora Mae Keifer-Olfs. I had the pleasure of meeting Nora this April at her home and was amazed by the similar experiences that we have had with our time in the chapter.

Nora moved to Pullman, WA when she was in the third grade, and has called Pullman home ever since. Throughout Nora's time in school she never thought of college as an option, until, to her surprise, she was given the opportunity to enroll in and attend Washington State University. Nora had a friend in high school who decided she was not going to attend college, and instead gave the opportunity to attend college to Nora. Nora was then able to enroll in Washington State University herself, and study Speech Education. Nora's high school friend who gave Nora with this amazing opportunity also encouraged Nora to participate in sorority recruitment. She wanted her to be able to get involved in as many activities as possible in college, Nora had not considered going through sorority recruitment at that time but then decided that this would be a good opportunity to meet people and get involved in Washington State University. Throughout the recruitment process, Nora was drawn to Sigma Kappa. She explained that the women of Sigma Kappa were warm, kind, and inviting and she was instantly interested in joining the kind, authentic sisterhood.

Throughout her four years as a member of Sigma Kappa, Nora lived in the chapter house, which is a piece of her time in the sorority that she cherished. Being that she was the youngest of her biological sisters and never had the bond with family members of a similar age until she entered college; she was able to live with her Sigma Kappa sisters every day and experience a new bond among her sisters that she cherished. She mostly enjoyed how close she got with her new sisters by sharing the chapter house with them and seeing them each day.

Nora explained to me that she has always been a leader, and has always enjoyed being involved in her community. She served as Chapter President her senior year, as well as serving on the Panhellenic Council. After college, Nora got married to someone she met while in college, and continued to stay incredibly involved in the chapter, as well as in the local community. She served on Sigma Kappa’s Corporation Board for 62 years, as well as eventually becoming the Corporation Board president. Nora was also able to make history, by becoming the first female Whitman County Commissioner, and got many opportunities to travel to Washington D.C., and create change, and bring funding to her community.

To this day, Nora continues to live out Sigma Kappa’s values such as sisterhood and friendship by meeting with current members of the Alpha Gamma chapter for lunches, as well as with women who were a part of her Greek family when she was in the chapter. She enjoys meeting with one of her sisters from the chapter to watch and talk about the Academy awards every year, as well as hearing from the Sigma Kappa alumnae group in her community.

By meeting Nora, I was reminded why I joined Sigma Kappa. It's for women like her, who are kind, powerful, and authentic women. Nora reminded me that as a Sigma Kappa, I have lifetime connections to women all over the nation who are doing amazing things, and living out Sigma Kappa's values of personal growth, friendship, service, and loyalty every day. Thank you, Nora for reminding me why I joined the sisterhood of Sigma Kappa, and continuing to be such a bright light in our community. 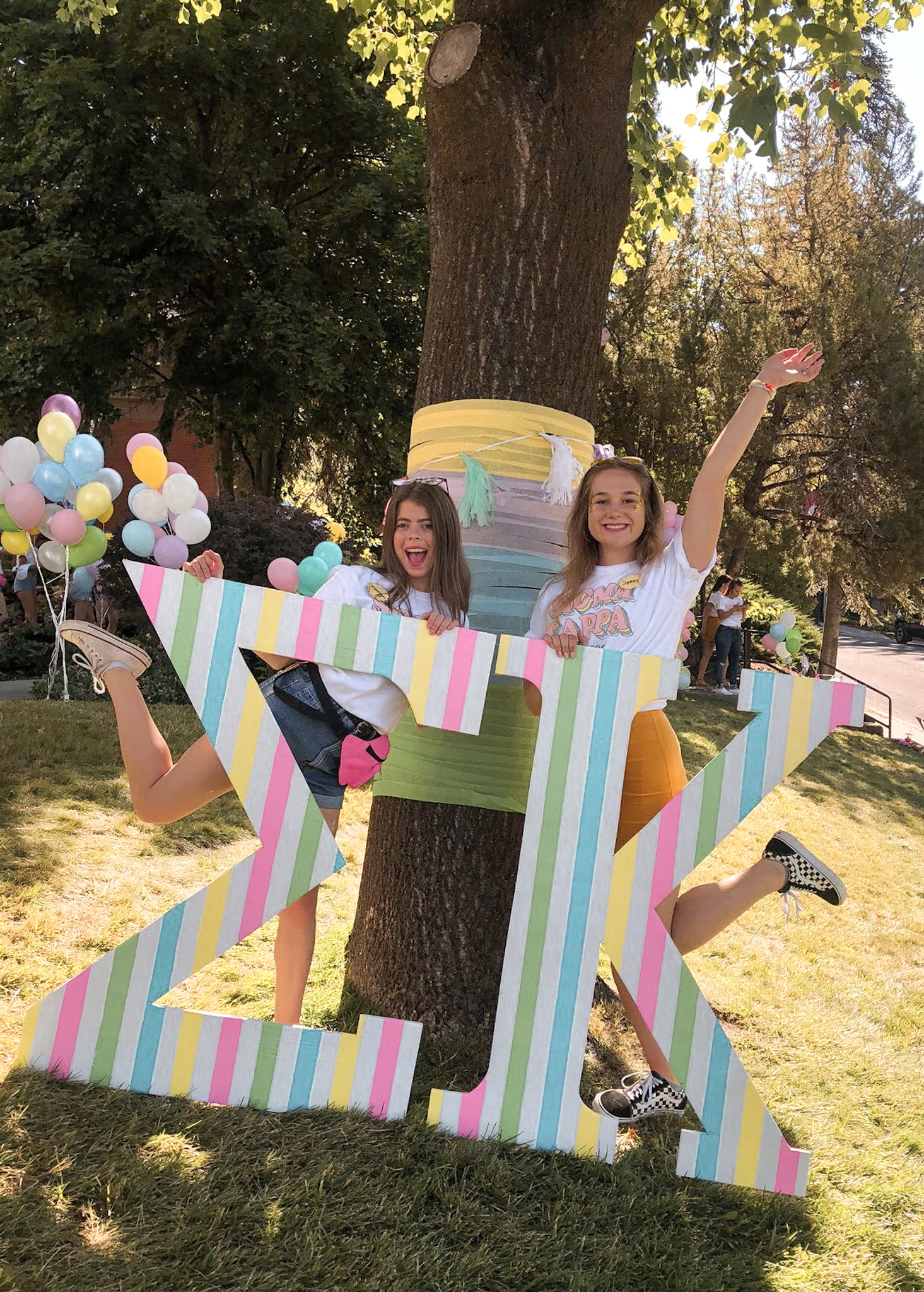